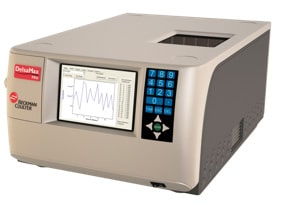 The DelsaMax Core provides sizing of particles as small as 0.4nm with sample volumes as low as 1µl with a separate static light scattering optical system for accurate molecular weight measurement from 300 to 106 Da.

DelsaMax CORE can be used for a broad range of applications requiring both accuracy and high sensitivity. For example, the DelsaMax CORE is ideally suited for studies of nanoparticles, proteins, vesicles, viruses, and colloids.

The sample is filtered to eliminate dust particles, which might interfere with the signal from the molecules being measured. Solutions are injected into cuvettes and placed into the sample cell. The total sample injection volume (including filtration) is approximately 20 µl using the 10 µl cuvette. After the cuvette is placed in the sample cell, the sample is illuminated by the laser. The scattered light is correlated in the DelsaMax CORE, which then sends the results to the PC for analysis by the DelsaMax Software software package.