One Size Doesn’t Fit All

Size matters in vaccine delivery systems. Nanoparticles smaller than 200 nm generally present a greater immunogenic response than micro-particles larger than 1 micron. This rather simple statement is based on the common understanding that particles with sizes resembling the dimensions of viruses are treated like viruses by the body. In the case of manufacturing for novel COVID-19 vaccine, adenovirus around the same size as SARS-Cov-2 (median of roughly 90-100 nanometers) are manipulated as carriers (or viral vectors) to trigger spike proteins production. In contrast, published literature showed that the effect of vaccines given orally, intranasally, or via other mucosal surfaces favour micro- over nanoparticulate formulations due to higher antigen load. The size of the impurities also significantly affects vaccine efficacy. In sum, many vaccine formulation ingredients should have controlled particulate size, size distribution, and count throughout the process of development, manufacturing, storage, and administration.

The upstream process of vaccine preparations requires careful virus characterization to achieve optimized infectivity and stability. Infectious titers are used to determine the concentration of viral particles that can transduce cells and its virus load in a sample. Two established analytical techniques to measure infectious titers are:

Both approaches quantify the amount of virus present in a solution. Viral Plaque Assay for lentivirus, for example, takes up to two weeks of incubation time to determine its result in a form of Plaque Forming Units (PFU) per mL. The counting of PFU is also subjective, resulting in low reproducibility from one analyst to another. qPCR, on the other hand, does not discriminate between whole, broken, empty, aggregates, infectious or non-infectious viruses; it merely determines relative viral gene expression and correlates the value back to PFU. The drawback is that the qPCR requires prior knowledge of the viral genome sequence, can be costly, and analyses concentration of genomic material, not infectious virus since uncoated RNA or DNA may exist in a sample, but, without a coat, be unable to enter a cell. 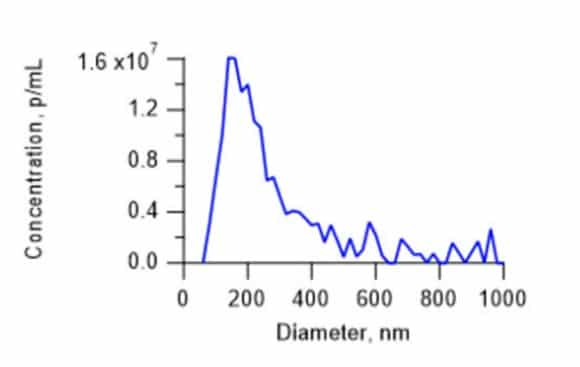 The ability to effectively analyse the entire size range allows the ViewSizer 3000 to successfully correlate known infectious titer to the total particle concentration with a R2 value of greater than 0.9, proving the multi-laser NTA technique a new, cost-effective and time-efficient alternative to VPA and qPCR. 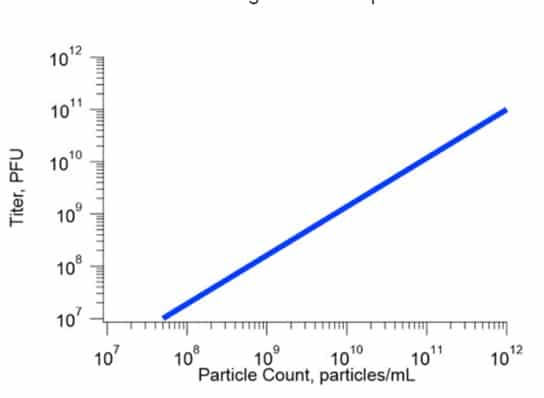 Virus-like particles (VLP) are meant to mimic the virus of interest to provoke a therapeutic effect (such as immunity) without the expense of virus or risk of infection. They have been the focus of countless investigations on innovative vaccines. The size of VLPs is similar to that of viruses, which typically ranges from a few tens to a few hundred nanometers. In addition to the ViewSizer 3000 multi-laser NTA technique, the LA-960 Laser Diffraction Particle Size Analyzer is also well suited for VLP analysis. Laser diffraction is an ensemble technique that allows quick, routine analysis. The technique is also fundamentally more sensitive to larger particles such as contaminants. Depending on how the VLP is manufactured, fragments of starting material will likely be present in the sample at larger sizes than the VLP itself. This arises when materials (such as emulsions) are prepared with a large or broad size distribution and then the size reduced to produce a final product. Remaining large particles can lead or unwanted immune response or issues with filtration in subsequent processing (such as filtration sterilization). To analyse viruses and VLP alike, it is essential a technique covers a wide dynamic particle range.

An example size result (below Figure 3) shows three separate populations. The finest (smallest particle size) population is the VLP itself. The remaining populations (with diameters over about 1 micron) are starting material that has not yet been sheared or otherwise milled to finer sizes. The LA-960 can report size metrics for the entire population as well as metrics for each individual population using the Multimodal Report. 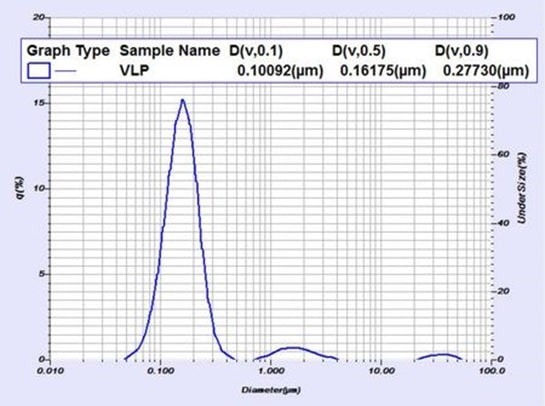 Figure 3: Particle size distribution and results for a VLP material as measured by the LA-960. This sample shows three separate populations. The finest (smallest particle size) population is the VLP itself. The remaining populations (with diameters over about 1 micron) are starting material that has not yet been sheared or otherwise milled to finer sizes.

Exosomes for a New Generation Vaccine

A subgroup of extracellular vesicles (EV) known as exosomes play an increasingly important and intricate role in diagnosis and treatments of various diseases. They are responsible for transferring genetic material and cell-to-cell communication by carrying various nucleic acids, including RNA, lipids and proteins. Its immunogenic properties reportedly correlate with the amount of associated antigens, according to many published reports, thus, creating an opportunity for potential vaccine development.

Exosome particle size and concentration are especially scrutinized as they present important clinical information. To date, however, EV research still lacks standardization for its purification process. It also have been limited by the analytical technologies used to measure them. It is well understood, however, that EVs are a heterogeneous group of particles with a range of sizes and biogenesis; the size distribution are expected to be wide, even after processing.

The ViewSizer 3000 features three simultaneous operating lasers at 635 nm (red), 520 nm (green), 445 (blue) and a colour camera to accurately visualize particles of large dynamic range. It overcomes the common drawback of conventional NTA, which is the failure to size particles accurately in a polydisperse sample. Human Preadipocyte (Mesenchymal Stem Cell) Exosomes (100 ug) samples acquired from ZenBio was measured using the ViewSizer 3000. The result was validated by a tunable resistive plug sensing technique and showed a profile with D50 particle diameter of 148 nm and total particle concentration of 5.7 x 107 particles/mL. 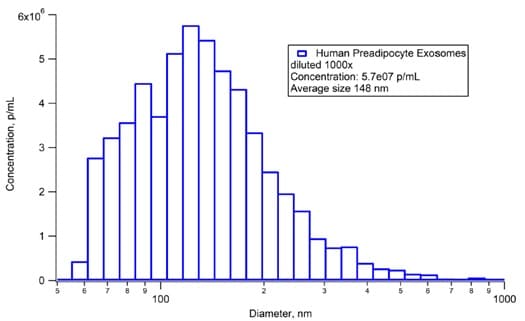 Viruses, VLP’s (such as adjuvants) and exosomes can be analysed for size and concentration using a multi-laser nanoparticle tracking analysis (NTA) instrument, the ViewSizer 3000. Most samples show a wide size distribution that frustrates single laser NTA. If only size distribution is needed, such as in a size reduction process, laser diffraction has also proven useful.