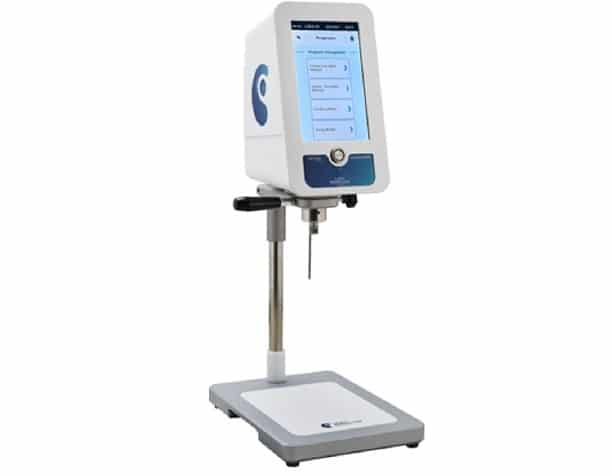 Non-blended set yoghurt has a gelified texture at rest which can be a problem during viscosity measurements using cylindrical spindles. This study shows the impact of choosing a measuring system to analyse such a product. A flow curve in geometric mode enables the rheological behaviour of this product to be viewed from 0 to 100 s-1 with a very slow shear rate progression. The aim is to determine the best geometry for which the product will not “break” when the speed is increased.

As soon as it is removed from the refrigerator, the yoghurt is delicately placed into the DIN1 cup, then a shear rate ramp of 0.1 to 100 s-1 is carried out according to a logarithmic progression. Correlation of the Casson Model up to 100 s-1 means that it can be determined if the product responds to shearing all along the curve or not.

The curves obtained for the same yoghurt with the two spindles results in some significant differences: With the VANE 6 blades, the rising curve reflects the “gel” rupturing, characteristic of non-blended yoghurt, and the descending curve presents a Casson-type shear-thinning profile, with a YV of 13 Pa and a plastic viscosity of 360 mPa.s, which reveals its behaviour in the mouth. With the 13-system, the rising curve is flat and shear stress seems to decrease when shear rate increases. In addition, the Casson correlation is not as good on the descending curve (R = 0.721 against 0.988 for the “VANE” measurement). In conclusion, this study shows the importance of choosing the right geometry based on the nature of the product to be measured. In this case, the VANE 6 Blades stops the sample from compounding and lets the shear to be spread through the product.