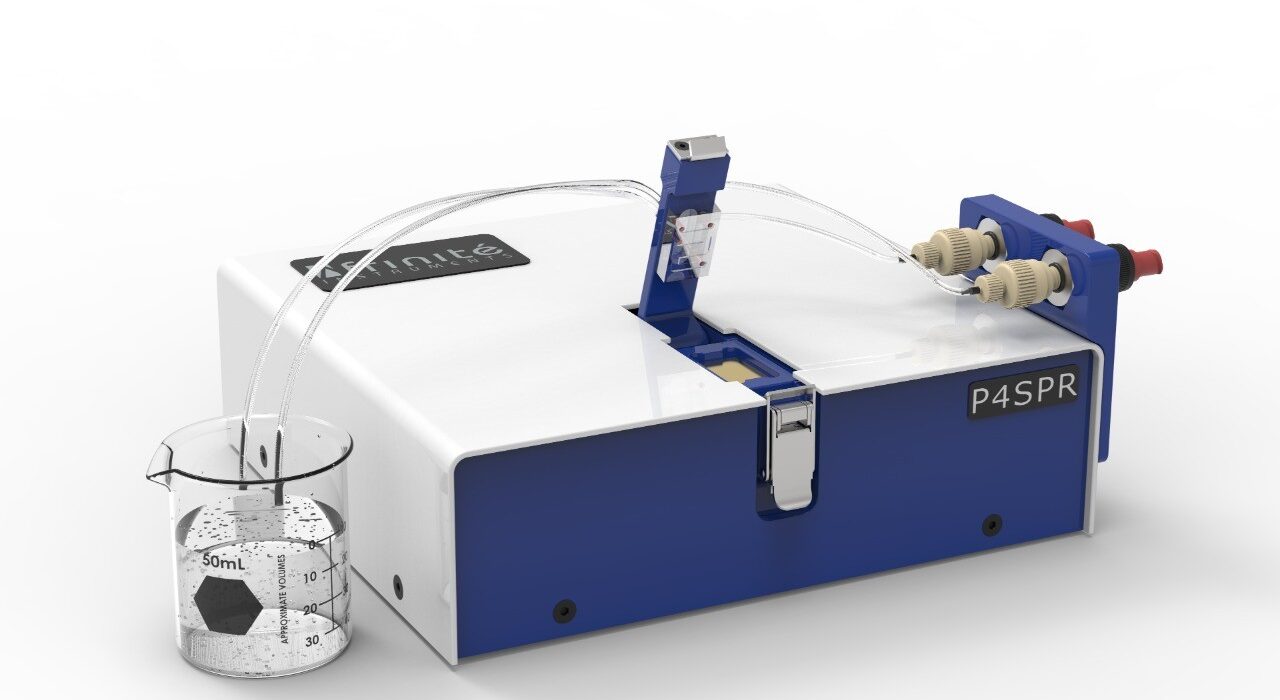 Acute lymphoblastic leukemia (ALL) is a disease where immature white blood cells originated from the bone marrow become cancerous, inducing proliferation in the blood flow and subsequently to organs in addition to prevent the proper function of other blood cells. One of the main chemotherapeutic agents proven for its efficacy for ALL is the E. coli L-asparaginase (EcAII) as a biological therapeutic agent. The challenge with undergoing such treatment is that the patient can potentially develop silent inactivation of the biological chemotherapeutic agent by generating antibodies to neutralize EcAII and therefore reducing treatment efficiency.

In order to detect the presence of anti-EcAII in patients, EcAII is employed in an immunoassay format. This method was previously used with the P4SPR to detect the anti-therapeutic antibody, anti-EcAII antibody, in undiluted serum of child patients. Biosensing with SPR has the advantage of minimizing sample preparation and reducing analysis time. However, the main challenge of developing the assay was to immobilize native EcAII antigen with reproducible sensor efficiency.

SPR is a powerful bioanalytical technique in assay optimization as it provides real-time monitoring of label-free targets. In this case, the immobilization density and the level of response to the anti- EcAII antibody were carefully monitored. This allowed researchers to understand the underpinning mechanism of the immobilization process and determine the optimal protocol to build a more efficient sensor for a clinically relevant immunoassay. 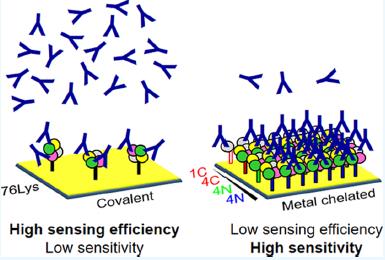 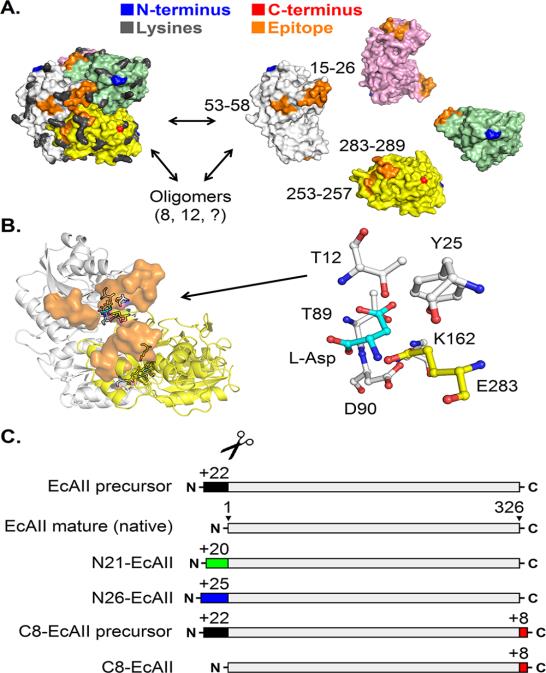 Figure 2 – Structure of native and His-tagged EcAII. (A) EcAII complexed with L-Aspartic acid as a functional homotetramer (left) and individual monomer subunits (right). The N- and C-termini are used for metal-coordination and the surface-exposed lysine residues are for covalent cross-linking. (B) Intimate dimer shown as a ribbon structure (left) and a conformational epitope (orange surface) clustered around the entrance of the active site. (C) Native and variants of EcAII, N21-EcAII and N26-EcAII have N-terminal His-tags and monomeric and tetrameric C8-EcAII has a C-terminal His-tag.

The EcAII forms a tetramer with the dimerization of intimate homodimers to form a functional homotretrame. The homotetrameric structure exhibiting four identical active sites formed by complementation of intimate homodimers. Although several antigenic determinants of EcAII have been identified, its antigenicity in an immobilized form remains unknown.

To better understand the contribution of these factors on patient immunogenicity to EcAII, a heterogeneous surface immobilization of native EcAII was compared to a homogeneous one. The surface immobilization of EcAII was performed by coordination of N- or C-terminal histidine (His)-tags of EcAII variants, tetrameric as well as monomeric (Figure 1).

First, the SPR gold sensor was coated with AffiCoat, a peptide self-assembled monolayer (SAM), to reduce nonspecific binding and introduce –COOH groups. The terminal -COOH are available for covalent binding with lysine residues on native EcAII via amine coupling with EDC/NHS. For metal chelation of terminal His-tag, CoNTA was further attached onto the AffiCoat. With both surface preparation, the EcAII was in contact with the surface for 20 minutes then washed off with buffer.

The native E. coli L-asparaginase II was commercially available via Kidrolase, EUSA Pharma. The design and production of the N- and C-terminally His-tagged versions of recombinant EcAII developed for immobilization and SPR sensing were done in-house. Three His-tagged versions of EcAII were tested: N21- and N26-EcAII which harbor 20 and 25 additional amino acids and C8-EcAII which harbor 8 additional amino acids (Figure 2).

SPR biosensing experiments were performed using the benchtop P4SPR device. The prepared immunosensor, both native and recombined EcAII, was first passivated to reduce nonspecific binding later in the test. Blank human serum was injected and in contact with the sensor for 10 minutes. Then, human serum spiked with 2 concentrations of polyclonal rabbit anti-asparaginase antibodies was injected, and binding was monitored for 20 minutes.

Table 1 – Summary of immobilization and immunosensing performance of EcAII receptors. 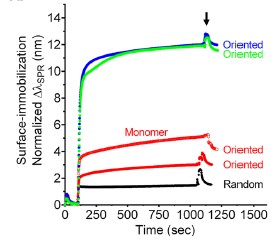 Table 1 summarizes the immobilization characteristics of the various EcAII variants on the SPR chip and their bioanalytical performance. The surface density calculation is shown in appendix.

Native EcAII and other variants were immobilized onto the SPR sensor chip for assessment of the impact of the mode of immobilization on the receptor surface coverage (Figure 3). The native EcAII was immobilized on the sensing surface in a random manner by covalent cross-linking of lysine residues with EDC/NHS chemistry whereas His-tagged EcAII variants were immobilized with metal coordination on the sensor surface. The surface coverage determined for oriented His-tagged EcAII was 5 to more than 10 fold greater than covalent cross-linked EcAII (Table 1). In addition, the surface coverage with His-tagged EcAII was highly reproducible with relative standard deviation (RSD) of 3 to 18% compared to 50 to 70% for native EcAII. The low surface coverage of the C8-EcAII (monomeric or tetrameric) in comparison to the N-terminal variants could be explained by the fact that the C-terminal tag (8 residues) is less accessible for coordination. Moreover, results indicated that the monomeric C8EcAII did not re-assemble into a tetrameric form whereas the tetrameric EcAII variants did not change in structure upon immobilization as demonstrated by corresponding immunosensor SPR response, low SPR shift for the monomeric form and high SPR shift for tetrameric forms (Figure 1.).

Additionally, the P4SPR data showed that the Nterminal modified His-tagged EcAII had greater surface density relative to both Kidrolase and C8-EcAII which resulted in better detection of anti-EcAII detection as shown at 15 and 150 µg/mL. N26-EcAII and C8-EcAII demonstrated 2-fold increase in SPR detection than randomly oriented native EcAII. The signals were further boosted with oriented tetrameric N- and C- terminally tagged EcAII providing 5-fold and 3-fold greater detection signal than Kidrolase and oriented monomeric C8-EcAII respectively (Table 1). Regarding the sensing reproducibility, RSD of 35% of Kidrolase was also higher than the His-tagged variants with RSD of 5 to 20% at both target antibody concentrations (Table 1). Correlation was made between the immunosensing signal and the surface coverage of EcAII receptors with R2 of 0.9571 at the higher antibody concentration with the oriented N-terminally His-tagged variant (Figure 4). 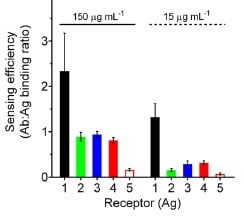 The sensing efficiency is defined as the number of analyte molecules detected per molecule of the immobilized receptors or Ab/Ag binding ratio. It was observed that the native tetrameric EcAII has a significantly better sensing efficiency than the His-tagged variants despite having low surface density and poor sensitivity. The average of 2.3 target antibody molecules were detected per immobilized Kidrolase molecule with binding ratio for about 2 for 1. This is 2 to 3-fold more efficient than for the tetrameric His-tagged EcAII variants, which can only bind to 0.9 antibody per molecule. This is explained by the higher density on the sensing surface than Kidrolase (Table 1). The average density of immobilized Kidrolase was ~7fold (1.6 x 1011 molecules cm -2) lower than native EcAII with average surface density of ~ 1.15 x 1012 molecules cm-2 in the crystal lattice (PDB 3ECA) plane. This gives an average distance between protein tetramers of 11.4 nm, from centre to centre (c.t.c) in comparison to average c.t.c distance between the immobilized tetramers of 2.7-fold greater (30.5 nm). On the contrary, the surface density tetrameric Hist-tagged EcAII variants immobilized on the sensing surface was 1.3 to 1.8 fold greater than in crystal lattice, with c.t.c distances between tetramers of about ~1.2 to 1.3-fold shorter. This could be caused by the higher packing with the 8- and 25-residue terminal linked tetramers to favour bivalent antibody binding. Nonetheless, the lower sensing efficiency of the His-tagged EcAII is compensated by the greater surface density and by the reproducibility which ultimately ensure greater sensitivity when detecting anti-EcAII in serum.

Affinité instruments’ P4SPR is a modular, portable, multichannel system with flexibility in assay development and optimization. Its accessibility and ease of use allow for quick evaluation of assay parameters such as the effect of immobilization approaches on receptor surface coverage as well as sensing efficiency. Its multichannel feature increases result precision and additionally, the demonstrated assay sensitivity proves the system to be a powerful analytical tool for immunosensing which is especially interesting for analysis of biotherapeutic agents in biological samples. No required sample pre-treatment and minimal and shorter testing procedure are one of the main advantages over conventional ELISA technique.

Established in 2015 as a spin-off of the Université de Montréal, Affinité instruments’ foundation is built deep knowledge accrued on over a decade of research in SPR. The commercialization of promising innovations is spearheaded by a diverse leadership experienced in business, science and engineering.

This is an open access article published under an ACS AuthorChoice License, which permits copying and redistribution of the article or any adaptations for non-commercial purposes.

The surface coverage (Γ, ng cm-2) of the immobilised native or His-tagged EcAII was calculated from the change in the wavelength (ΔλSPR) upon immobilization of EcAII using the following equation: