P4SPR – Understanding the mechanism of action of transmembrane (TM) proteins

The CD36 (cluster of differentiation 36) is part of transmembrane proteins with versatile functions. Encoded by the CD36 gene, the CD36 protein is found on the surface of many cell types in vertebrates. It has various roles in lipid uptake, cell adhesion and pathogen sensing. As a result, several diseases related to arterial hypertension, diabetes, cardiomyopathy are associated with mutation or misregulation of these transmembrane proteins. 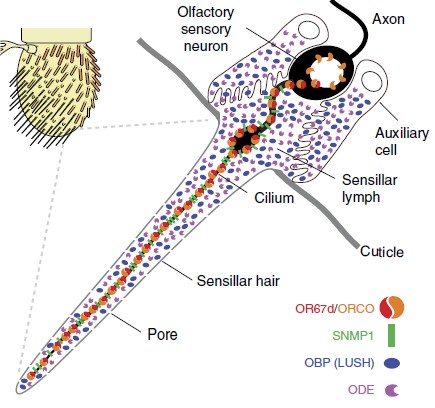 Figure 1 – Schematic of Drosophila antenna with blown up illustration of the cilium.

Despite having important roles, the precise mechanism by which these proteins function has not been well understood. Literature has reported many studies based on in vitro biochemical assays in which a large number of ligands as well as ligandbinding regions in these proteins were identified. In other reports, evidence showed that the ligand/CD36 proteins interactions are potentially involved in mediating ligand translocation across the membrane and receptor-mediated ligand internalization. However, the relevance of these uncovered biochemical properties of CD36 proteins has not been extensively verified in its native environment.

One genetic model of particular interest, Drosophila melanogaster offers a useful system to investigate CD 36 protein function in vivo as it is known to have 14 CD36-like proteins. One of the Drosophila CD36 family member called sensory neuron membrane protein 1 (SNMP1) is expressed in olfactory sensory neurons (OSNs) which have functions of detecting lipid-derived pheromones. SNMP1 is often found in the dendritic cilia of the insect where the odorant receptors (ORs) are also located (Figure 1). The better understood function of Drosophila SNMP1 in OSNs is its detection of the male sex pheromone (Z)1-octadecenyl acetate (cis-vaccenyl acetate, cVA). Lack of SNMP1 reduces sensitivity of these neurons to cVA stimulation. Therefore, SNMP1 plays an important role in the pathway, but its mechanism of action is not clear. Nonetheless, the interaction of SNMP1 with presence of extracellular lipidic ligands to general downstream responses draws similarity with mammalian CD36 in fats gustatory sensing and immune recognition of pathogenic bacterial lipids and lipoproteins. Hence, SNMP1 presents a pertinent model for understanding CD36 proteins in vivo.

Surface Plasmon Resonance (SPR) has shown labelfree sensing and real-time monitoring benefits in studying biomolecular interactions to elucidate pathways. In this application note, as a complementary technique to structure-function characterization of the SNMP1 with molecular genetic, cellular, biochemical, electrophysiological and homology modelling approaches, the P4SPR was employed to study the binding interaction of different insect pheromones and the CD36 protein. Ultimately, the result is used to provide a comprehensive picture of the mechanism of action of these transmembrane proteins exposed to a stimulant in this scenario. 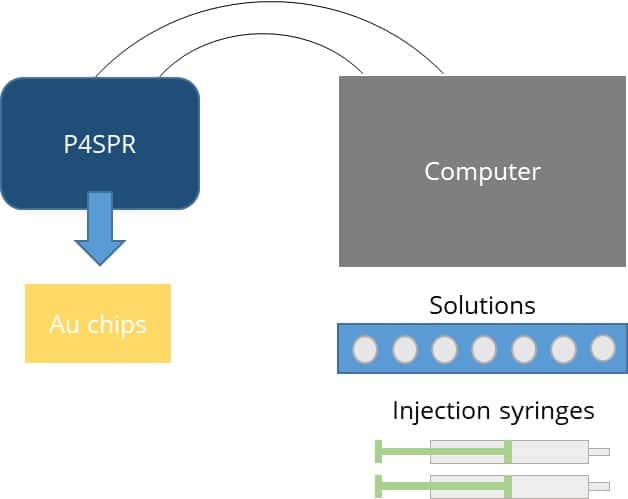 Figure 2 – Schematic of P4SPR connected to a flow delivery system.

The USB-powered Portable, 4-Chanel SPR (P4SPR) was connected to a laptop to initiate operation control and data recording using the P4SPR Control software. A peristaltic pump was easily integrated in line of the P4SPR to ensure consistent solutions flow onto the SPR chips (Figure 2). Experiments were performed on Au SPR chips that were inserted in the cell holder of the P4SPR. A PDMS microfluidic cell (Figure 3) was placed on top of the SPR chip and firmly pressured in place with the P4SPR cover to avoid any leaks. The microfluidic cell is patterned with an S-shaped channels and a linear one both connected to their respective inlet and outlet ports. During the experiment, sample solutions were flowed into the S-shaped channels whereas control solutions flowed over the other channel. The S shaped channels has 3 parallel sensing area which can provide triplicate sample measurements for better precision. Setting up the device to be ready for experiments took less than 5 minutes. 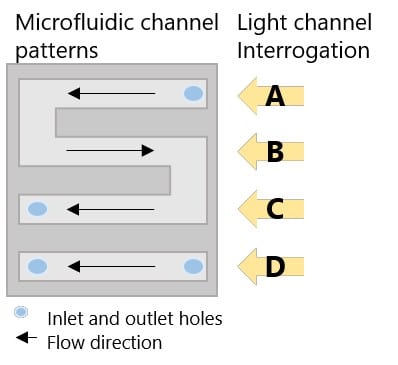 First, the surface of Au SPR chips were coated with a peptide self-assembled monolayer with functions analog to Ni-NTA to bind His-tagged proteins. Since the ectodomain of SNMP1 was difficult to express and given the homology in structural features, the mammalian CD36 was used in this study as a substitute for the binding studies. The immobilization of the His-tagged CD36 was done after 15 minutes with the introduction of a highly concentrated His-tagged CD 36 protein solution (Figure 4). In total, the binding interactions of 9 pheromone molecules with CD36 protein were investigated. Ligands were prepared in PBS at concentrations between sub-mM and mM. The solubility of hydrophobic ligands in PBS was increased by adding 0.1% dimethylsulfoxide to the buffer. Every SPR step from immobilization to assay was monitored in real-time. Ligand solutions were injected successively from low to high concentrations. For each ligand, the time of analysis was 30 minutes where 6 different concentrations were flowed through the P4SPR. SPR shifts at the thermodynamic equilibrium were recorded and plotted to determine the affinity curve for each ligand. A Langmuir isotherm was fitted to the affinity curves to extract the equilibrium dissociation constant (KD) and maximum SPR signal using MatLab curve-fitting tools. 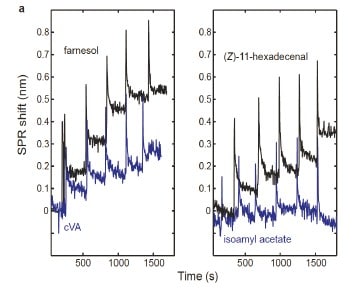 Results from SPR sensorgrams showed an increasing SPR shift with increased concentrations of farnesol, CVA and (Z)-11-hexadecenal. For isoamyl acetate, no SPR shift was observed suggesting little to no binding with CD36. It is important to point out that in 30 minutes, 3 sensorgrams were collected in parallel providing standard deviation of the binding signal in the concentration-response curves.

The concentration-response curves were established and overlapped for comparison. Five of the pheromone molecules have exhibited binding measured by SPR (Figure 6). Lowest dissociation constants were measured for cVA, farnesol and (Z)11-hexadecenal which are similar in magnitude as some of the known CD36-binding peptides (Figure 7). 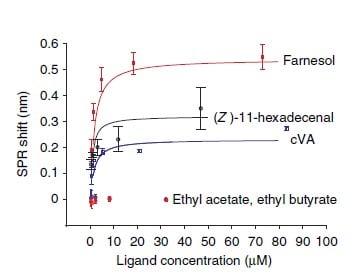 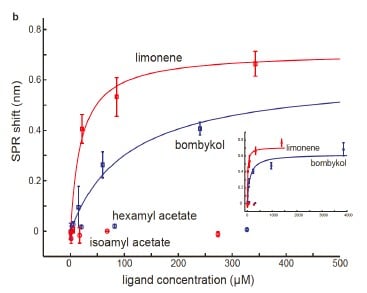 Figure 6 – Concentration–response curves of Δλ for the indicated ligands, which were used to calculate corresponding dissociation constants. 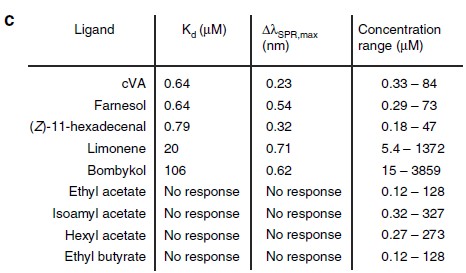 Specificity of the interaction between the pheromone and CD36 was examined. Other stimulants which are know to only activate nonSNMP1-expressing neurons (ethyl acetate, isoamyl acetate, hexyl acetate or ethyl butyrate) showed no interactions (Figure 7). This shows strong evidence that insect pheromone binds directly with the CD36 ectodomain. In addition, the P4SPR has shown sufficient sensitivity to study binding of ligands of molecular weights between 88- 250 Da. This demonstrated the capacity of P4SPR to acquire specificity through relevant surface modification and detect small molecules of low molecular weights.

Affinité instruments’ P4SPR is a modular, portable, multichannel system for offering basic understanding of mechanism of action of these transmembrane proteins with pheromone stimulation. Its modularity allows for easy integration with a flow delivery system. Its multichannel feature increases result precision and its sensitivity allows for detection of small molecule of low molecular weight. For a comprehensive study where multiple approaches are employed to understand the mechanism of action behind a biological function, a sensitive and user friendly system such as the P4SPR is well suited for easily accessible rapid SPR data to characterize binding interactions.

P4SPR has offered complementary binding information to further evidence direct binding of pheromone to the transmembrane protein responsible for the subsequent tunneling effects of the pheromone intracellularly. The P4SPR provided invaluable information on the binding interaction and specificity of different pheromones and CD36 to further uncover its mechanism of action. About Affinité Instruments Established in 2015 as a spin-off of the Université de Montréal, Affinité instruments’ foundation is built deep knowledge accrued on over a decade of research in SPR. The commercialization of promising innovations is spearheaded by a diverse leadership experienced in business, science and engineering.

Affinité Instruments would like to thank Natalia Bukar and Jean-François Masson for optimizing and performing the SPR analyses in addition to write up the experimental and results and discussion section on the SPR binding studies.

This work is licensed under a Creative Commons Attribution 4.0 International License. No changes were made. To view a copy of this license, visit http://creativecommons.org/licenses/by/4.0/.