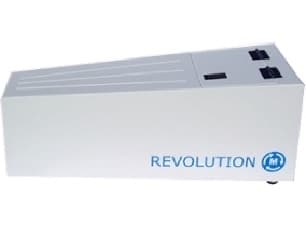 The Effect of Lubricants on Powder Flowability for Pharmaceutical Application

Pharmaceutical tablets are manufactured through a series of batch steps finishing with com- pression into a form using a tablet press. Lubricants are added to the powder mixture prior to the tabletting step to ensure that the tablet is ejected properly from the press. The addition of lubricants also affects tablet properties and can affect the behaviour of the powder mixture. The objective of this research was to investigate the effect of lubricants on powder flowability as flowability into the tablet press is critical. Four lubricants (magnesium stearate, magnesium silicate, stearic acid, and calcium stearate) were mixed, in varying amounts, with spray-dried lactose. In addition, magnesium stearate was also mixed with placebo granules from a high-shear granulator. Measurements based on avalanche behaviour indicated flowability potential and dynamic density and were more sensitive to changes in the mixture and provided a more accurate and reproducible indication of flowability than traditional static measurements. Of the tested lubricants, magnesium stearate provided the best increase in flowability even in the low amounts commonly added in formulations.

Lubricants are commonly added to help in the tabletting of many formulations. Following compression, a tablet must be ejected out of the tablet press die. Lubricants reduce the friction between the tablet and the die metal surface, which reduces the ejection force and helps to ensure that the tablet is cleanly ejected and without cracking or breakage.

There are two ways in which lubricants reduce friction: a liquid lubricant can form a thin, continuous fluid layer be- tween the tablet and the metal die surface or lubricant particles can form a boundary layer on the formulation particles or metal die surfaces. Boundary lubricants are more commonly used over fluid lubricants (1). There are six types of commonly used boundary lubricants for pharmaceutical tableting: (a) metallic salts of fatty acids; (b) fatty acids, hydrocarbons, and fatty alcohols; (c) fatty acid esters; (d) alkyl sulphates; (e) polymers; and (f) inorganic materials (1).

Magnesium stearate, a metallic salt boundary lubricant, is probably the most commonly used lubricant for pharmaceutical tableting; it is relatively inexpensive, provides high lubrication, has a high melting point, and is chemically stable (2). Calcium stearate is another metallic salt boundary lubricant that can replace magnesium stearate in a formulation (1). Metallic salt lubricants are typically added to formulations in the range of 0.25 to 1.0 wt.% (1). Stearic acid is the most commonly used fatty acid boundary lubricant. In general, fatty acids are more effective die lubricants than the corresponding alcohols, and the alcohols are better than the corresponding hydrocarbons (3). Stearic acid is typically added at levels of approximately 2.5 wt.% (1). Hydrous magnesium silicate or talc is an inorganic boundary lubricant. It is useful when other lubricants cannot be used due to chemical instabilities and is typically added in the range of 1.0 to 10.0 wt.% when being used as a tablet glidant and/or lubricant (1, 4–6).

Lubricants are necessary for tabletting, but they can cause undesirable changes in the properties of the tablet. Lubricant type, concentration, method of lubrication, and the manner of incorporating the lubricant all affect tablet compression (7). It is generally accepted that magnesium stearate has more negative effects on the hardness of the tablets with more deformable materials than brittle ones (1). When microcrystalline cellulose, an example of a plastic material, was mixed with magnesium stearate, the tablet strength was weakened significantly as the amount of added lubricant in- creased. Similar results were obtained with other lubricants (8). The adverse impact of magnesium stearate on other commonly used plastically deformable excipients, such as lactose and starch, was also observed (9). Since many lubricants are hydrophobic, tablet disintegration and dissolution rates are often reduced by the addition of lubricant (3). Multiple studies (10–12) have concluded that the negative effects are due to a combination of the large surface area and hydrophobicity of the lubricant.

Many methods have been developed to measure the flow properties of powder. These methods commonly include the static angle of repose, Carr’s compressibility index, Hausner ratio, and shear cell testing. Avalanche testing is an emerging powder flowability measurement method. The avalanche testing equipment consists of a rotating drum and measurement system. As the drum rotates, the powder sample is carried up the side of the drum until the weight of the powder causes it to collapse or avalanche. Properties of this powder avalanche are then measured and analysed to indicate powder flowability. The measurement methods and analysis vary with the manufacturer: a photocell array for the Aero-Flow Analyzer, an advanced camera and imaging system for the Revolution Analyser (13), a load cell to measure the change in moment of inertia for the Gravitation Displacement Rheometer (14) and positron emission particle tracking for equipment developed by Lim et al. (15).

Powder flow is critical during tableting as it must flow easily and uniformly into the tablet dies to ensure tablet weight uniformity and production of tablets with consistent and reproducible properties (16–18). There are many factors that influence powder flow. Examples of physical properties that influence powder flow include particle size and size distribution, density, surface morphology, and particle shape. In general, smaller particles with low densities and an irregular surface and shape exhibit decreased flow compared to large, smooth, and spherical particles with high densities (19). Particle shape and surface morphology affect particle–particle con- tact and therefore can increase friction if contact area is increased which then reduces flowability. As boundary layer lubricants form a film around particles, these lubricants can affect friction through modified particle–particle contact, thereby also affecting powder flow.

Spray-dried lactose (FlowLac 100, Meggle) was used as the initial test particle. As dried granules are commonly mixed with lubricants just before tabletting, the spray-dried lactose was then replaced with placebo granules. The granules were made in a high-shear granulator from 50% (w/w) (dry basis) lactose monohydrate (Merck, dpsm of 113 μm), 45% (w/w) microcrystalline cellulose (Alfa Aesar, dpsm of 77 μm), 4% (w/w) hydroxypropyl methylcellulose (Alfa Aesar, dpsm of 48 μm), and 1% (w/w) croscarmellose sodium (Alfa Aesar, dpsm of 139 μm) with water as a liquid binder added to a moisture content of 30 wt.%. Granules were then oven dried at 24°C and a relative humidity of 2 to 3% for more than 24 h to ensure a granule moisture content of less than 2 wt.%. Dried granules were sieved to include only those between 150 and 600 μm.

The powders were blended using a Patterson Kelly V blender with a stainless steel V shell for 15 min at a rotation speed of 25 rpm.

Particle size distributions of the spray-dried lactose and lubricants were measured using a Malvern Mastersizer 2000.

Scanning electron microscope (SEM) images of the spray-dried lactose, granules, lubricants, and samples of the mixtures were taken using a Hitachi S-4500 field emission SEM. The powders were mounted on a plate and coated with gold before examination. The images allowed the shape and morphology of the powders to be examined and allowed visualization of the interaction of the lubricants with the spray-dried lactose and granules.

The bulk and tapped densities of the mixtures were measured using 100-ml samples. For the bulk density measurements, the powder flowed down a vibrating chute into a 100- ml cylinder and the mass of the powder sample within the cylinder was then measured as follows:

The sample within the cylinder was then vibrated/tapped until the resulting volume no longer changed and was then measured to determine the tapped density:

Static angle of repose measurements were performed using a Powder Research Ltd. angle of repose device. Samples of about 60 ml flowed down a vibrating chute and through a funnel to form a pile below on a calibrated level platform to allow the angle of repose to be determined. Samples were measured in triplicate.

Various indicators of flowability were investigated using a Mercury Scientific Revolution Powder Analyser. A sample size of 118 cm3 was loaded into a drum with a diameter of 11 and width of 3.5 cm. This drum was rotated at 0.3 rpm until 128 avalanches had occurred; an avalanche was defined as being a rearrangement of at least 0.65 vol.% of the sample in the drum. Optical measurements with a resolution of 648× 488 at 60 frames per second monitored the powder surface as the sample was rotated and software calculated the flowability indicators. Samples were measured in triplicate.

The two main indicators of flowability analysed were avalanche time and dynamic density. Avalanche time is determined as the average amount of time between successive avalanches during drum rotation. The Mercury Scientific Revolution Powder Analyzer also measured the dynamic density of powders through the known sample weight and the measured volume of the powder as it tumbled within the drum. 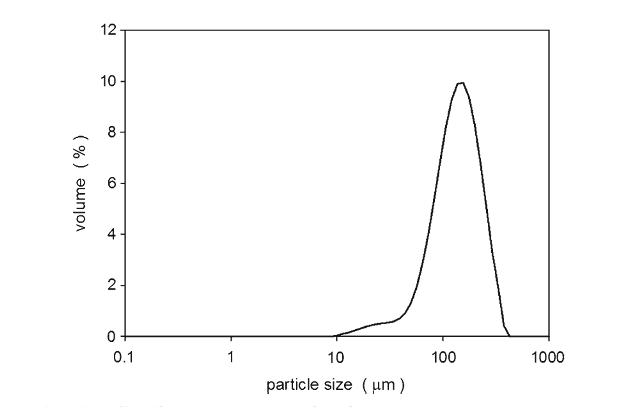 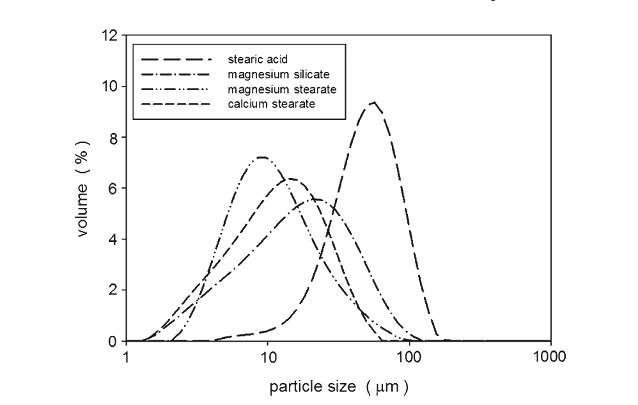 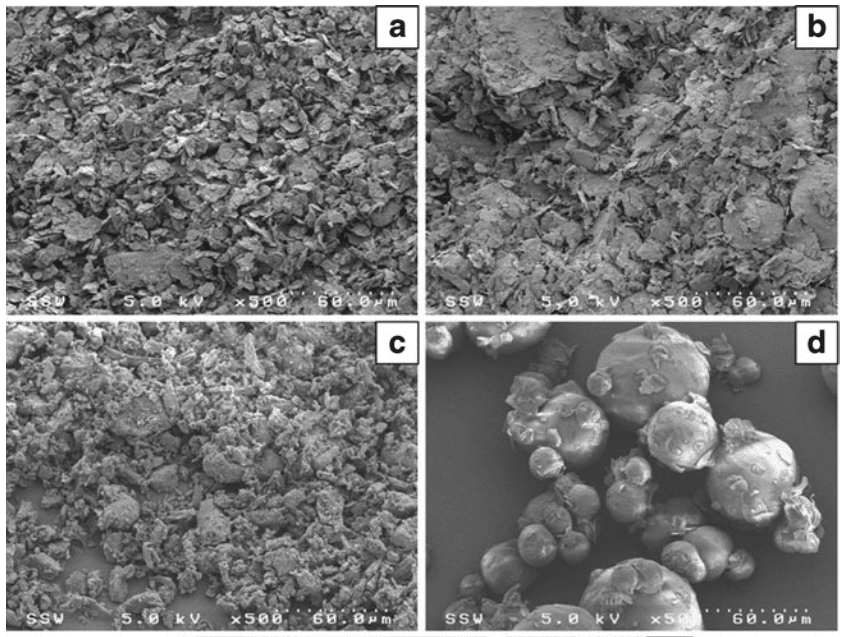 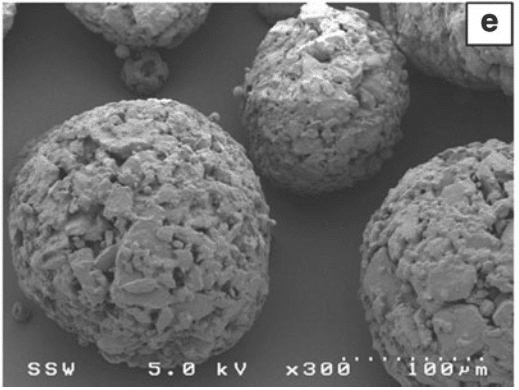 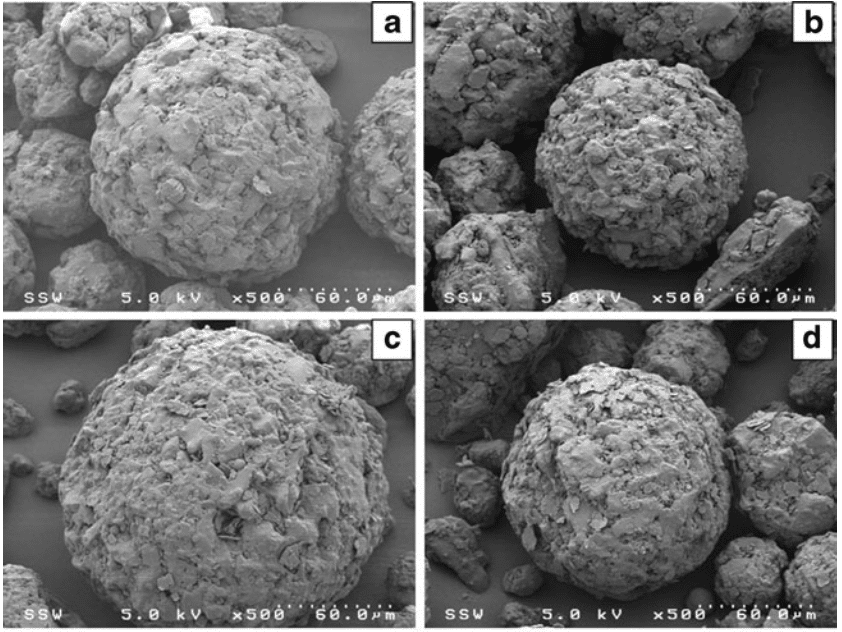 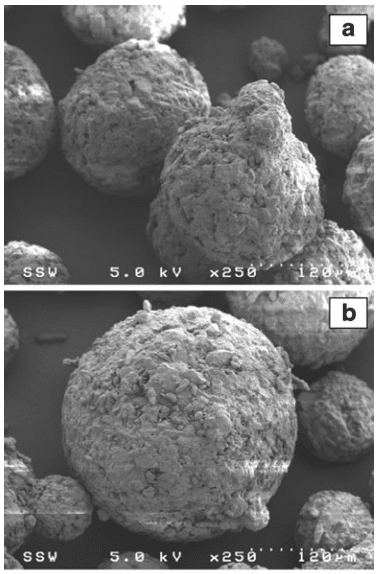 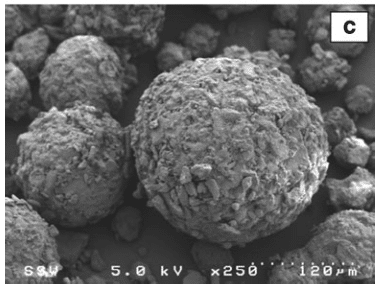 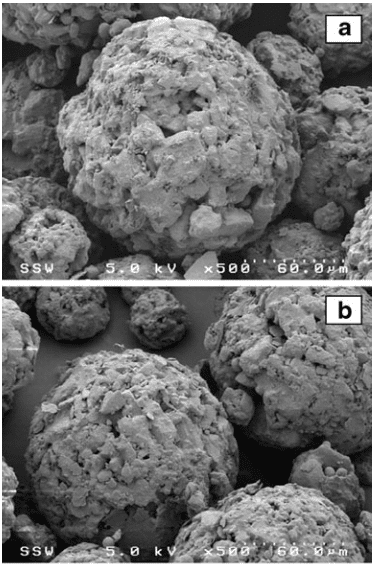 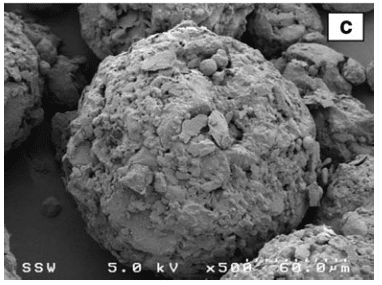 Although calcium stearate is also a metallic salt boundary lubricant and similar to magnesium stearate, its behaviour and effects when added to the spray-dried lactose were different. 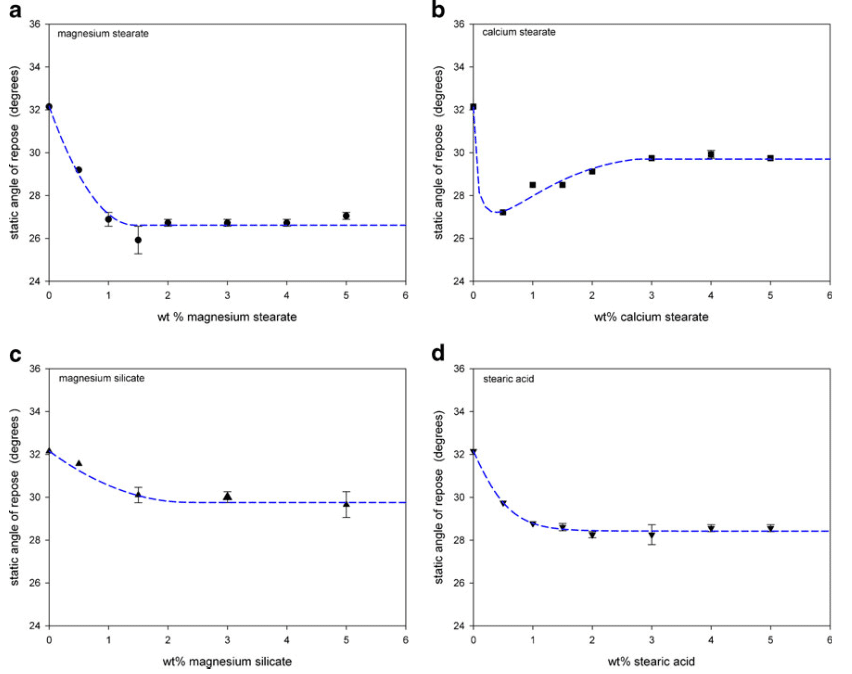 Fig. 8. Static angles of repose for the lubricant and spray-dried lactose mixtures 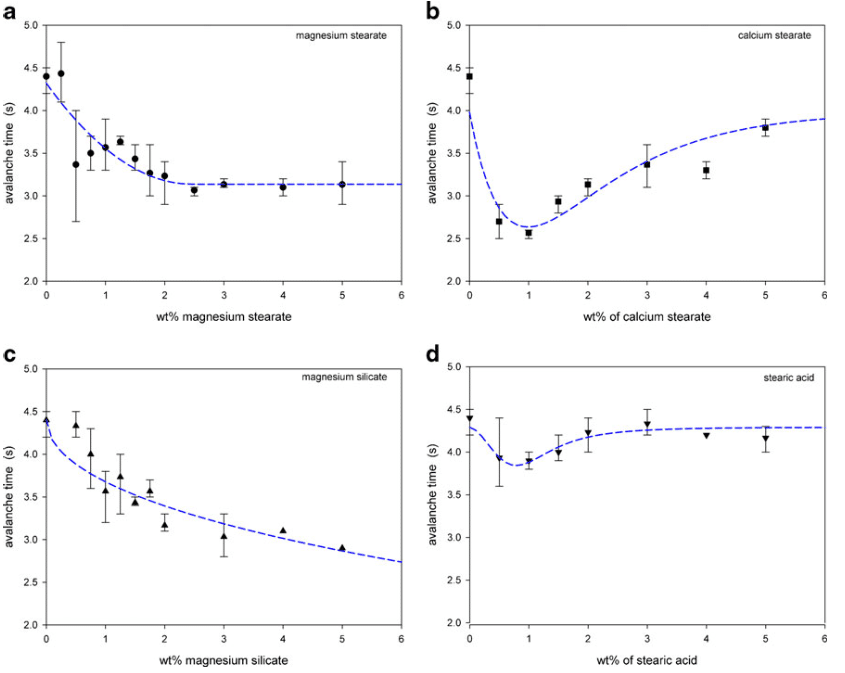 Fig. 9. Avalanche times for the lubricant and spray-dried lactose mixtures

Given its large size and spherical shape (Figs. 2 and 3), stearic acid did not fill in any surface cavities of the spray-dried lactose and it did not adhere to the surface of the lactose. As shown by the static angle of repose (Fig. 8d) and the avalanche time (Fig. 9d), stearic acid slightly improved the flowability for additions less than about 1 wt.%. The smooth and almost spherical stearic acid particles acted as spacers between the lactose particles. This reduced cohesive forces between the lactose particles and also reduced frictional forces as there were fewer stearic acid–lactose contact points than lactose–lactose contact points.

The interactions between the lubricant and the spray-dried lactose varied with the lubricant and the amount of added lubricant. With the smallest median size, the magnesium stearate easily filled the cavities on the surface of the lactose particles. At this small size, van der Waals forces are important (4, 25) and promoted the self-agglomeration of the magnesium stearate flakes which did not immediately adhere to the lactose. 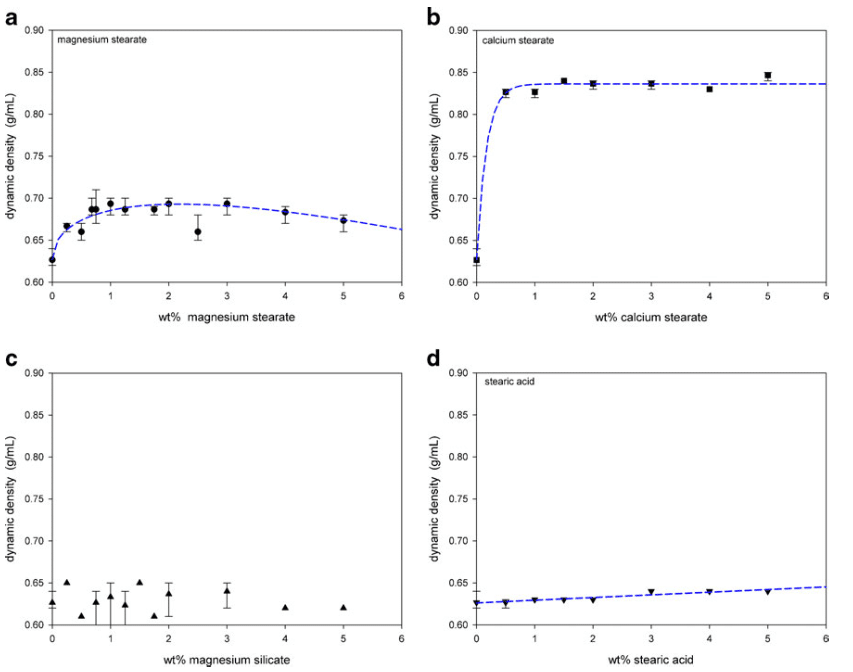 Fig. 10. Dynamic densities for the lubricant and spray-dried lactose mixtures 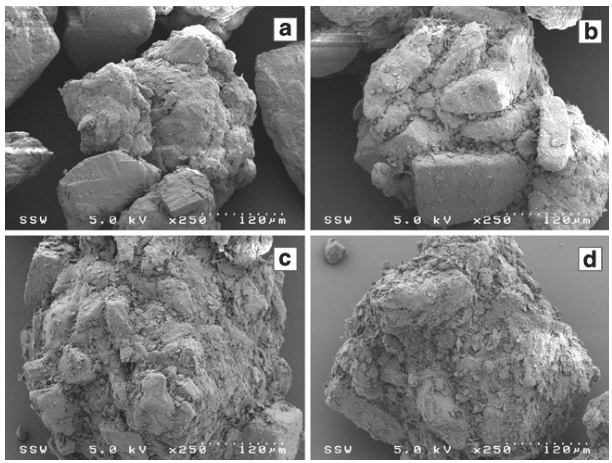 For magnesium stearate added to formulated granules, the optimal amount is usually a balance of lubrication requirements for ejection from the tablet press and negative impacts upon tablet properties such as strength and dissolution. The flowability should be measured at this point to determine improvements in flowability from the magnesium stearate. 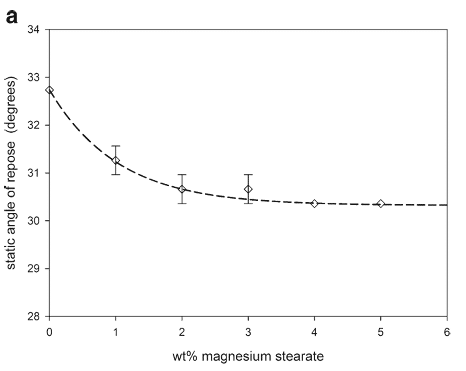 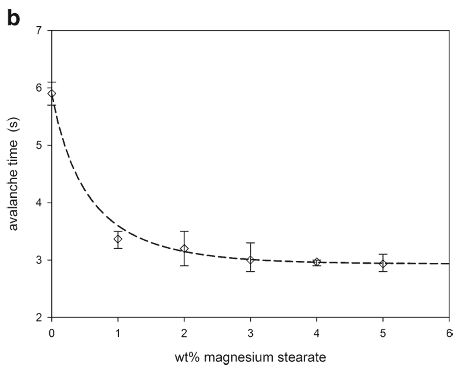 This improvement, in turn, could reduce the required amount of other excipients such as glidants. Therefore, determining the impact of magnesium stearate on flowability could promote changes in the formulation leading to a composition with fewer excipients while maintaining a high-quality tablet.

Lubricants were mixed with spray-dried lactose and placebo granules in varying amounts to determine the effect of lubricants on flowability. Differences in interactions between the lubricants and the particles affected flowability. Both magnesium stearate and magnesium silicate initially preferentially filled the surface cavities on the spray-dried lactose improving flowability by creating more spherical and smoother particles with less friction contact points. Calcium stearate did not seem to preferentially fill surface voids, and thus showed a different flowability effect; after an initial improvement in flow, excess calcium stearate decreased overall flow, since the excess lubricant increased surface irregularities on the spray-dried lactose. Stearic acid showed little effect on flowability. Of the tested lubricants, magnesium stearate provided the most improvement in flowability even at the low amounts that would be used in formulations. Magnesium stearate also preferentially filled surface cavities of the granules and significantly improved their flowability. As it is critical for tablet formation, the conclusions of this study highlight the importance of considering not only tablet performance and tablet final properties, but also flowability in lubricant selection.

The authors would like to acknowledge the Natural Sciences and Engineering Research Council of Canada and the Ontario Graduate Scholarship for their financial support. The Western University Graduate Thesis Research Award Fund is also acknowledged for financial contributions.

11. Johansson ME. Influence of the granulation technique and starting material properties on the lubricating effect of granular magnesium stearate. J Pharm Pharmacol. 1985;37(10):681–5.

12. Johansson M, Astra Laekemedel A, Soedertaelje S. The effect of scaling-up of the mixing process on the lubricating effect of powdered and granular magnesium stearate. Acta Pharm Tech. 1986;32(1):39–42.