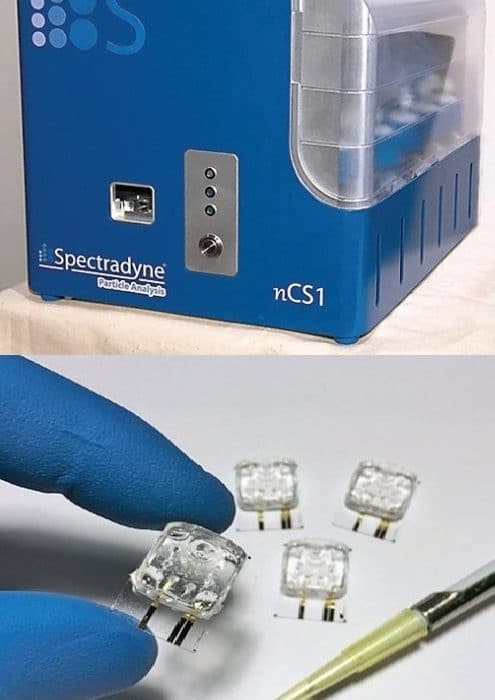 Separating truth from fiction in label-free measurements of EV’s

As therapeutic and diagnostic applications of extracellular vesicles (EVs) proliferate, accurate characterization of the size and concentration of EV populations becomes more and more critical. Scanning Electron Microscopy (SEM) techniques are often employed but are expensive and slow. Flow cytometry is accurate but requires labelling. Light scattering-based technologies are cheaper and faster but lose sensitivity when measuring particles with low index of refraction contrast, and, critically, can generate misleading results even when great care is taken in executing the measurement.

In this poster, measurements of EVs using Microfluidic Resistive Pulse SensingTM(MRPSTM) are compared to measurements done by Nanoparticle Tracking Analysis (NTA) and SEM. It is found that NTA measurements are prone to the reporting of false peaks in EV distributions, in contrast to MRPS and SEM. A straightforward theoretical explanation of these false peaks, related to the strong (6th-power) dependence of light scattering intensity on particle diameter, is given. The high resolution of MRPS-based measurements of EV size and concentration opens the possibility of using MRPS to improve EV purification protocols.

A theoretical discussion demonstrates why these false peaks can occur when using light scattering particle analysis techniques, such as NTA, on continuous particle size distributions. Following the theoretical explanation, two real-world applications will demonstrate and verify this occurrence, by comparing particle size distributions generated using NTA and MRPS. The two samples are:

1. An undisclosed protein formulation: the sample was supplied at 5mg/mL and stressed prior to measurement to produce aggregation. Protein aggregation produces a natural power-law distribution of concentration versus particle size which is well documented in the literature.

2. A reference exosome sample, previously characterized by SEM. The EM measurements are used as a gold standard reference.

Theory:
A common problem associated with NTA is that, when challenged with a polydisperse mixture of particles, it reports a peak in the distribution of particles when in fact no such peak is actually present. The reason for this is due to how NTA works. For particles smaller than a few hundred nanometres, Rayleigh scattering determines the intensity of the scattered light used to monitor the moving nanoparticles. This intensity scales inversely with the illuminating wavelength to the fourth power, but more importantly, it scales with the particle diameter to the sixth power. This can be seen in the formula for the scattering cross-section:

Here n is the particle’s index of refraction; note that if n is close to 1, as with biological particles, the cross section can become very small. The scattered light intensity does not directly provide the diametric measurement; that is instead extracted from the particles’ Brownian motion, which allows extraction of the particles‘ hydrodynamic radii.

As a result of the diameter to the sixth power dependence, the light intensity scattered from larger particles is much higher than that from smaller particles. NTA can then miss the much dimmer small particles, and thus misreport the relative abundance of small compared to large particles. This is illustrated schematically in the left figure, which shows the relative scattering intensity for three different particle diameters.

This effect has been reported in the published literature (see Ref. 1), and the figure at right, adapted from Ref. 1, shows how this can affect the measured particle distribution, where the blue curve shows the true particle distribution, and the orange curve shows what NTA might report, assuming that NTA over-reports larger particles in proportion to their scattering cross-section. This creates a false peak in the distribution, due to the increase of intensity with diameter, until the falling concentration of particles at larger diameters overwhelms this effect. When protein aggregation occurs, it naturally tends to produce a power law distribution of concentration versus particle size. A monomer becomes a dimer, then a trimer, and so on forming larger oligomers and eventually polymers. The figure above shows the results of measuring stressed protein therapeutic using NTA and MRPS. The MRPS results show a power law relationship that extends to the Limit of Detection (LOD) of 60nm for the cartridge used (TS-400). The NTA results show spurious artefacts along what should be a smooth path. More importantly, though, is that the NTA results also show a distinct sensitivity roll-off beginning as high as 250nm, as predicted by the theoretical model previously discussed. The larger particles’ signals in the NTA totally overwhelms the dimmer signal produced by the smaller particles. Although, in theory, the NTA system specifications indicate it should be able to properly quantify particles much smaller than 250nm, in practice it is unable to due to the presence of the larger particles. In a similar fashion, when reference urinary vesicles were measured in both NTA and MRPS systems, the MRPS system showed a clear power law distribution down to 50nm, the LOD for this cartridge (TS-300), as shown in the figure below. The NTA (red data) once again showed significant sensitivity roll-off beginning at 150nm for the same reason as seen above with the protein aggregates, and once again agreeing with the theoretical model. Furthermore, in this example, the MRPS results (in blue) are verified by agreeing exactly with the referee method (TEM data, in green). Great care needs to be taken when interpreting exosome particle size distributions produced by light scattering techniques. We have shown both in theory and in two real world examples how power law distributions can be falsely characterized by NTA, with a loss of sensitivity producing what may be interpreted as a peak. MRPS uses an electrical measurement of one particle at a time to correctly size and count all particles in a polydisperse sample, avoiding the artefacts produced by light scattering techniques such as NTA, thus producing more accurate characterisation.